The only thing missing was the stadium lights shattering

Guys have been singing the praises of young Grady Sizemore all offseason. He’s a superstar, and on monday he once again proved why. Grady lit up a Jose Contreras fastball in the first at-bat of the first game of the 2007 season, thus setting the tone for something rather storybook for the underdog Cleveland Indians.

The blast catapaulted the upstart Indians to a 5-run first inning off the former Cuban defector Contreras. It was an excellent showing of symbolism, as I think that this is the year Grady Sizemore turns superstar of all of baseball, and catapaults the Indians to a deep postseason run. Afterall I picked Sizemore to be the American League’s MVP for the year. Was there seriously any more storybook of a start to the season? 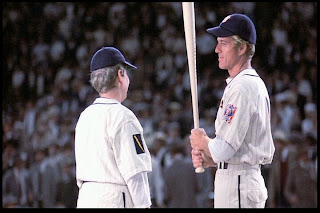 Grady’s blast would have made Roy Hobbs very proud. The Indians must get out to a fast start and avoid losing many games early, and I predict they will. It seems like it has just been forever since the Tribe won the first few games to start the season, and don’t remind me of the year they won like 10 in a row with Matty Lawton at the helm, because they went on a 50-90 run to end the season afterwards.

This is the year of the Tribe. The year of The Natural, Grady Sizemore.