Please, don't look so surprised when we tell you Tony La Russa is our favorite big league manager 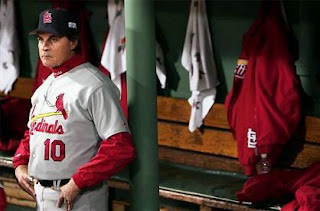 Don’t be alarmed. That car that is in front of you is fine. Don’t swerve, don’t honk (you might awaken him), don’t call the cops. Don’t freak out. Just go on about your business alright? There’s no reason to panic because the car is making an “L” towards oncoming traffic and slowly approaching the opposite highway turn-lane. Nothing here is out of the ordinary, for it’s Tony Larussa making his slow drive home from a night of reflection.

You know, I’ve always liked Tony La Russa, I just recently realized how much. I don’t know if it’s because of the rather unknown video game that I played the shit out of in my youth, or the porn star hair cut, demeanor, and facial expressions. I mean, tell me you couldn’t see Tony L. bringing out his Italian sausage and pounding momma home on some cheap VHS tape entitled Big Black Asses 10 that you found. I can see it, I almost have seen it. That hair flowing wildly in the wild, sweat on the forehead. You want it from Tony L. baby? Yeahhhhhhhhhh! Yeahhh, awwwww. You get the picture.

The guy has been doing what he does for a long time, and doing it well. I remember as a kid after the Oakland A’s fell to defeat in the ALCS to the Toronto Blue Jays, La Russa went into the Blue Jays locker room and entered with a vulgar, tirade-laced, hurang. Ever since then I’ve been a Tony La Russa guy. My whole family was watching that night on ABC national television and they thought it was horrible. A lot of entire families were watching that night, and Tony knew it. I was 10 at the time, and hell I thought it was great. You tell me that’s not exactly what you’d want in a big league manager? Acting all calm and staring Clint Eastwood like at players, umpires, opposing managers, then striking, pouncing like a fucking mongoose on an instant with the fury of a tiger! That is what I want managing my big league team.

Tony’s clearly got a recipe for success that no other big league managers can rival. Hell no other 62 year old men can rival it either. That recipe includes heading to token dive-bar, late, downing several dark malted liquor milkshakes, with only ice, and then grabbing your keys and heading for the fucking hills. I mean, I can’t believe I read it but this man is 62 years old! 62!!! So this is how he found the faucet for the fountain of youth? It’s not a bad idea at all. Hell there’s better than even odds that I will try my hand at it.

62 years young, and behaving like a fucking frat boy. It’s really something that makes me smile, makes me proud to say I’ve always been known to dabble in La Russa fan-dom. I mean just read this shit and tell me it doesn’t make you smile, like you know when you say the word “Puppy”. How can you not smile when you say the word “Puppy”. Go ahead, say it, see you’re smiling.

On March 22, 2007 La Russa was arrested in Jupiter, Florida for suspicion
of driving under the influence of alcohol. He was found asleep at the wheel of
his running SUV while at a green light. He did not initially respond to the
police knocking on the window, even though he still had his foot on the brake.
He was booked at the Palm Beach County Jail and blew a .093 blood alcohol
content, which is above the legal limit of .08.

Now, Correct me if I’m wrong, but he wasn’t that drunk. I’ve known guys that blow a .24, and they lived to tell about it. Hell I am positive there have been several nights in my life that I could have approached .40, and I’m still here. Leave the fuckin’ guy alone, cop pigs. He was at a light and he probably looked down to check and see if his wife called to bug him to get his ass home, and he drifted off. It was night time. I mean, at least his foot was on the break. Where’s the crime in that? Sure, the keys were in the ignition, but for crying out loud he wasn’t driving per-say. The fact that he didn’t respond to the police knocking on the window is just the money shot of the entire deal. I love that. Imagine the scene of the officers walking up to Tony’s SUV:

“Man I dunno he looks like he’s asleep Chief.”

“Knock on his window, Lt. I wanna see what this guy’s been ingesting tonight. When I signal, raise your gun, he could be dangerous.”

“Hey Mr. open your window. We just wanna talk for a second”

After all this I can’t wait to get to a Cardinals game this season. Although Sweet Lou Piniella is my favorite manager of all time, La Russa overtakes General Patton as my second favorite American General and Leader of men. I want to invite La Russa to one of my fraternity’s Alumni Dinners, as the guest speaker. I want the dinner to be held in his honor, and I want his ass at the after party. That son of a bitch is going to be taking shots off some girls ass cheeks and when he’s finished with that we’re shot-gunning out in the yard. The night all leads him down a path of playing bartender and holding the keg hose for us all. Can’t you see it? He’d be just great. Tony L, really working the room, making the girls laugh, at the ripe young age of 62.

Go get em’ this year Tony. Take no prisoners. You have earned one of the highest merits there is. You have the blessing of the Diamond Hoggers.

Related Items
Next Story → How's this for marketing genius?