Home / Baseball Tonight / The tragic fall of an American masterpiece

The tragic fall of an American masterpiece 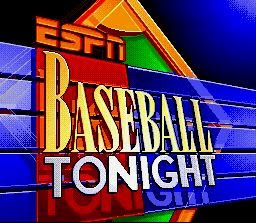 To baseball fans, this show is (was) the Holy Grail. It is to the baseball fan what the market report or Mad Money is to stockholders and money junkies. When your team or player leads off baseball tonight, it’s instantaneous hard-on. Nothing, and I mean nothing can make a man’s night like that happening. A close second is seeing 5 of your fantasy baseball team members on the ‘Going…Going…Gone’ list at the end of the show, one with a multiple homerun game. But to have Ravech and Gammons lead off the show with your boys, well you knew it was either an amazing win, or they got their ass kicked in startling fashion.

But that was then. There’s something different now isn’t there. I can’t quite put my finger on ‘it’, but something is definitely not the same. The treat has been stolen off the top of the cupcake, or something. It’s still an enjoyable program, because it’s the only thing we’ve got. ESPN’s Baseball Tonight has lost its swagger. The gleam is gone.

The biggest complaint I have with the show’s fall from grace of the Golden Years (1990-2002ish, R.I.P.), is it went away from everything that brought it to the dance. Back in those years, you could count on it being on every night, the 10:30 edition, and the 12:00 late edition. The only night you wouldn’t be able to see it was when Wednesday and Sunday Night Baseball got the stage, and on those nights you could see it before the game came on after Sportscenter. Now you’re forced to play a game of ‘poke and hope’ with the remote control. Some nights it can be found on ESPN at 10:00 ET. Some nights it’s on at 10:40, (given a shitty 20 minute timeslot to promote the ‘trifecta’). Other nights it gets ESPN2 all to it’s lonesome, oh goody, but it is on only at midnight, and by then you think it’s been replaced for the night by the chess world #1 contender match that runs right up until midnight when you’re tired of the guessing games. Is it that hard to leave the time slots the fuck alone for the most part ESPN? Your best show, the one thing you haven’t sold out on over the years–isn’t anything sacred anymore? You people are monsters.

I’ll tell you why I still watch. Every once in a while there is that golden glimmer that takes you back years, and reminds you of the good ol’ days in BBTN broadcasting. Karl Ravech and Petey Gammons being alive and on the show will give you that much (although Gammons gave us a scare when he had a stroke). They get rid of Dave ‘Soup’ Campbell and Harold Reynolds for bullshit reasons. They replace the pair with Rob Dibble (no longer on the show) and John Kruk, with all due respect, two guys who have NO BUSINESS telling me analysis on how the game should be played. Then they go and try to shove a pompus asshole like Steve Phillips down our throats nightly. Phillips uses the show, what used to be ‘our’ show, the people’s show, as his own personal spotlight and agenda to spout off about what is important to him or what a winning GM does.

That brings me to my next point. There is a new segment on the show, outlined as ‘Most Important Thing’. This segment features analysts’ comments on the most important story from the day’s happenings in MLB. This is usually the final segment of the show. Where do they get off thinking we give a fuck. I don’t know how many times that I’ve heard Kruk or Phillips say, “well it was huge for that team that Pedro came in the 5th inning before he left the ballgame and get a 1-2-3 inning even though he was roughed up for the rest of the day. That will be huge for this team down the stretch.” Hey, ESPN, how about you stop worrying about what is most important to your analysts and start focusing on what is the real ‘most important thing’, people like me who kept your show afloat for years.

Two things on the show I cannot complain about aside from Gammons and Ravech, would be that they’ve kept Web Gems around, and they put that little needle-dick Tim Kurkjan on the show. You know, I’m pretty sure Kurkjan never played baseball. In fact, I promise he never did. I’m not sure how he got mis-aligned from the world of cyber-pedophiling and building space shuttles, onto covering baseball, but I am sure glad he did it. He’s a wonderful addition. You’ll never see him meddling into other’s affairs and constantly reminding us of his accomplishments on the Major League Baseball stage. Just good, solid, analysis from a journalist that cares, even if he probably couldn’t last 4 minutes in the sack with a naked woman.

They can throw segments like ‘Extra bases’ and ‘On the Phone’ down the shitter along with ‘touch em all’. Fuck that. Extra bases is basically them dedicating 10-12 minutes of the show talking about the daily Red Sox or Yankees game. Every once in a while they’ll throw in a no-hitter by the Indians or Marlins, or someone on the Reds hitting 3 homeruns, maybe. On the Phone is cool, to a point, but not every night. Especially not when they were trying to market that shitty ESPN Mobile phone that didn’t work worth a fuck. And I’ll say it again: Isn’t anything sacred? Do the pricks at ESPN have to sell out everything? Even something as good and American as Baseball tonight?

I’ll watch again this year, every night, endlessly surfing through the channels trying to wonder what went wrong with this once great show. I’m dream of the boyhood days when the graphics and colors were bad, but the content was great on baseball tonight. That was then, this is now.

Related Items
Next Story → The 'other' Tim Kurkjan