Why I'd like to kick Ozzie Guillen in the dick

Hey, asshole. Yeah you. What the fuck do you keep looking at him for? I’m here to tell you why I’d like to kick Chicago White Sox manager Ozzie Guillen, right in the dick.

Usually when someone has incoceivable arrogance, ya know there’s usually a reason for it. Not in this case. After taking a quick look at Ozzie’s career stats, I’m still sitting here wondering why he’s so fucking cocky.

Let’s re-hash a few things about Mr. Guillen, aka cocksucker. He never hit above .288, and only hit as high as .280 twice. He never hit more than 4 homers in a season. He never drove in 60 runs in a season, which is nothing. He never had 30 doubles, or 160 hits in a season. His career OBP was .287, which is in a word, shitty. He never played for a World Series winning team, and only appeared in one as a player, with the Yankees in ’99 in which he did nothing (going 0 for 5 in 3 games). Then I say to myself, well maybe he was your token “slick fielding” shortstop. Not so much. “The Wizard who wasn’t Oz” only won one Gold Glove over the course of his 16 year career and that was because the voters know it’s a joke award, and they felt sorry for him because he looks oriental.

So where does he get off with such antics as calling writer Jay Mariotti a fag, making the choke gestures to the Cleveland fans, and just being an asshole in general? Let me have 2 minutes in the seats behind Ozzie Guillen. I’d have him ready to pull a Frank Francisco chair-bomb on my ass in a heartbeat. I’d fill his ear with the fact that he talks like Tarzan but hits like fucking Jane. It’s funny. You know I don’t remember him talking so much shit as a player. Maybe that’s because he knew he sucked ass and for some reason now, he thinks he is actually a good manager. Well he’s not. Oh and Ozzie, why would you call anyone a faggot? I remember back when you played you wore little pins of the Venezuala flag on your hat, and other gay decorations. Now that’s queerer than a football-bat. 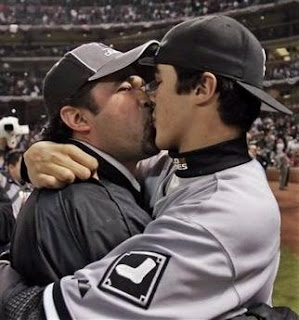 Wanna know what else is queer? Kissing your players. Yeah, I don’t care if it’s because you won the World Series. I don’t give a shit if you’ve found the cure for cancer. There is no reason to kiss a ballplayer, ever, unless you’re a groupie and that sparks a whole other debate. If I was Jay Mariotti I would have used your fag comment to breakdown your career numbers and light a fire under your ordinary-ass that wouldn’t be put out anytime soon, bitch.

Lets see here. Oh yeah, I remember when you dedicated your World Series one hit wonder to the country and people of your native Venezuala. Hey, asswipe, did you know we’re in America? Home of the red-white-and blue bitch. Our fine president, George W. Bush, takes shits bigger than Venezuala. Name one thing worthwhile to come out of Venezuala, and it’s a trick question, you can’t say yourself you self-loathing piece of shit.

I hope your White Sox go 0-162 this season, because every time they win, God kills 1 kitten. You make Barry Bonds look the role of Pope John Paul III, that’s how terrible you are. You’re a bad, bad person. I hope in old age that a vicious Urinary Tract Infection finds you, and rots off your small, Venezualen cock.

Thanks for listening to why I don’t like Ozzie Guillen. Now, here’s a video of how I’d treat Ozzie Guillen if we were face to face: