Home / Uncategorized / What a bother 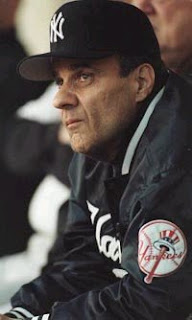 Oh brother. I hope today’s game isn’t a close one. I really wouldn’t want to have to do anything out of the norm. Being a great game day manager involves just ‘being’ in general. My favorite games are blowouts where the decisions are made for me. There’s a reason I like being the manager of the Yanks, I love those blowouts. Just stay away from anything that looks like a hairy situation. One day at a time Joe, one day at a time. Don’t give the reporters anything to talk about, don’t let the players have anything to fume about. Managing personalities, that is what I do best. Sure I can make some tough decisions late in the game, but that might cause someone to get mad, and I don’t want that.

I wonder how Frank is doing. I wonder how his kids are. I haven’t seen him in a while. Remind me to have him over for dinner and have Mrs. Torre make spaghetti and those fine meat cutlets he likes so much. I’ll eat my meal with just some light olive oil, pepper, and parmesan cheese. I don’t wanna have anything out of the norm. I don’t wanna talk about baseball either Frank, not at all. That’s my job, and business is business. Business makes me nervous. That boss of mine, he’s a real tyrant. I don’t wanna even get into that subject. If I have to answer one more time what it’s like to work with King Henry the VIII, well then my blood pressure might just go up a little bit, and I don’t want that.

Jeter singled to right. Ahh, Derek. How I appreciate you being here. What most people don’t realize is what makes you most valuable. With you doing my job for me most of the time, I can avoid conflict. Avoiding conflict is what has made me a good manager. If the guys aren’t selling out in their play, I know he’ll say something before I have to. That’s right, I can just show up, fill out the lineup card the same way every day, sit at the end of this here bench, and things will work out for the best.

A-Rod just struck out. Don’t hang your head Alex. I know you can do it. Even if I have my doubts I’ll just keep them right here in my head. It’s just between my brain and I, our little secret. If the media asks, I’ll quickly change the subject. If they mention the $25 million you’re making annually, I’ll point to the fact that there is a lot of guys in this game making a lot of money, then they’ll have to rethink things. Wise men like me just sit back and laugh, let the fools do all the talking. Don’t worry Alex, you’re position and role on this team are safe. I’m not here to upset anyone, that wouldn’t be very cordial of me.

Giambi just hit a three run homer. Great. That’s great, can’t you see, I’m ecstatic. That camera keeps panning me to see what I’m going to do. Hmmmm, lets see we’re up 3-0 with one out in the first inning. Can’t you see I’m jovial? Wait, I know, I’ll give a quick clap, and then when Giambi comes by me in the dugout I’ll pat him on the ass once. That will let everyone know I’m fired up. Jason’s a good player. If they ask me about him being on steroids, I’ll tell them that was the past. He’s a real Yankee now, and being a real Yankee is about conserving things, not doing anything that will make headlines. I’ll say something like “Jason is a professional.” That won’t give them anything on me. I’m not ending up on the front page of the Post. Thats an area that really scares me.

I think my gas tank is only 3/4 full right now, but I’m not sure. On my way to the ballpark today I forgot to stop by that Citgo on the corner before the parking lot. I like to have my tank full at all times, you never know when you might run out of gas. When it gets below full it just bothers me. I don’t think of it as I have almost a full tank. I think of it as I’m 2% on empty, and with each mile it increases. I don’t wanna get left out in the cold with no gas, even though I’ve taken the same route to the ballpark every day since 1995. Still, if I ever get stranded with no gas, I’ll have to walk and ask for help. If I have to do that I’ll start to get nervous, and I’ll have to converse with strangers. That would make me pretend I’m sociable, which I’m not. I don’t like to pretend. What you see is what you get. Vanilla. Remind me to get a vanilla cone on the way home at Citgo. I’ll get my gas, then I’ll get my ice cream. Scratch that, I’ll get it in a small plastic cup, the cone is just a waste. Doesn’t make much sense. If they ask me if I want butter pecan or rocky road, I’ll just give the clerk a dirty scowl, and he’ll know that I still want same old vanilla. It’s a good flavor really. It was the first flavor they ever came up with, you know.

Cano just caught a line out and got an unassisted triple play. Hey, that’s great! Way to go Bob. Look at the scoreboard, it says it’s the first time it happened since the 70’s here at the Stadium. Jimmy Carter was in office then. I liked Jimmy Carter. He wasn’t flashy, he was a people’s politician you know. He never really did anything noteworthy. It’s better to go unnoticed, people will hate you less that way. That is what is best for everyone involved.

Ok, lets add on to that lead. I’d like to say that right now, but not really. They know that’s what I want don’t they? Yeah they know that’s what I want. I will just lean over to Mattingly, slowly, and whisper something in his ear about what I saw on Jeopardy last evening. The guy risked way too much on the Daily Double. If I was ever elected to go on that show, I’d risk only a dollar. Just keep what you have, if you’re right, you’re in the + side. If you’re wrong you still have all you worked for. I’m not about taking risks, risks are the distant cousin of heart attacks. With me whispering to Mattingly, the guys will know that I want them to hit the ball hard this inning. He’s their hitting coach, they’re smart guys. They’ll put 2 and 2 together to get 4.

Man, am I glad Zimmer isn’t here anymore. I’ve known Don a long time, but man he was just the opposite of what I needed here in a bench coach. He was always saying crazy words that stood out to me. “Sheepfuck” and “Goddamn Gadzook”. I’d hear him get so angry that he’d just make up words with ‘Shit’ and ‘Cock’ mixed in. I didn’t like that. It’s not the Yankee way. He’s an older man than me, it’s not good for old men to yell and raise their voice. We’d have a questionable call go against us and he’d snap up off the bench next to me so fast it would startle me in a funny way, right in my chest. He’d start yelling and throwing stuff. I’d just look at him and the one time I spoke up and told him to forget things and sit down, he told me to ‘take my fucking hands out of that pussy jacket of mine, and act like I’ve got some pubes on my dick’. That was the end of our business relationship as far as I’m concerned. Acting like you have pubes on your dick gets you knocked on your butt by Pedro Martinez; and that really isn’t what I’m here for. Besides I like my hands in my jacket pocket. Both of them. That way it won’t give any wrong signals of body language to that devil in disguise camera. I swear, the day after the devil was conceived the camera was created. That thing gets more people into trouble….it’s always watching everyone. It’s a
wful cold here at times in the Bronx. Even with the heaters in the dugout, I don’t want to contract frostbite on my limbs and lose a finger.

Stottlemyre wants me to head out to the mound. He’s fine Mel. He’s walked two batters. It’s not like anyone has hit him hard yet. I’ll pretend like I didn’t hear Mel. He’ll either go out for a mound visit himself, or he’ll give it up. He’s known me a long time. I can’t believe he’d ask me to do something that risky, he’s known me too long for that. Alright fine I’ll head out to the mound but don’t think I won’t remember this Mel. Ah brother, what am I going to say to Mussina so that he doesn’t get angry with me. I won’t raise my voice, I won’t even make eye contact. I’ll just go out and think of a joke, and then head back to home base where it’s safe and sound. I gotta walk slower out to the mound I’m getting there too quickly. The fans are starting to get restless. I can’t think about them, they understand. Hmmm, about this joke, I wonder if he’s ever heard the one about Pittsburgh Nelly. Even if he has I know it will calm his nerves, that’s my favorite one.

This hat is too tight on my head. I wonder if anyone will mind if I take it off. I might just take it off and scratch so that can be the excuse. No one will know I’m unhappy with how tight it is, they’ll just think my head itches for a moment. I don’t want to convey that I’m frustrated. I’m fine everyone, just itching. I give myself an allotted quota each game of 15 words. If I go over that limit I’ve gone too far. I’m at 8 and it’s only the 3rd inning. I’ve got to do something. I’m heading down to my office to take a nap. If anyone asks, I’m on the toilet with a case of the holiday grunts.

Oh Lord. What a day, what a job. I wonder if I’ll survive today to see tomorrow….