Here at Diamond Hoggers, we don’t usually get warm and mushy on you. That isn’t what you want to hear. We’d rather take the high road and make you laugh or tell you about something important, or what we deem important. However, special players call for special measures, and this post is about one of our very favorites. Adam Dunn, the Big Donkey is probably not just my favorite player in baseball, he’s probably my favorite athlete of all time.
I’m a sucker for the homerun, and with Adam Dunn that’s about what you get. I have seen him homer live at a game more times than probably any other player. I got to go to 30-40 games back in the summer fo 2004 (his career year) when I was living and working in downtown Cincinnati. I have been going to Reds games since I was a kid, and I can remember back into 2002, Dunn’s 2nd year in baseball and first full season, in which I got to see him play several times at old Riverfront stadium. I’ve also traveled and seen him play at Jacob’s Field in Cleveland and Citizens Bank Park in Philadelphia. I was at the ballpark the night that Dunn hit a game winning walk off grandslam against the Tribe last season in Cincinnati.
Somewhat of a natural, with all that raw power, and all the strikeouts, Dunn hasn’t had that 50 homerun season I’ve been waiting for yet. I think that 2007 could be that year. He’s not a young pup anymore, and it pains me to say it for sure. It’s time to make an MVP run and be an All Star again. It is going to work in his favor, because I think the Donkey has grown up. Reading up on the articles, he is a changed man it seems.
Dunner likes to dip. He’s a country boy. He’s tough as nails, he plays everyday. He is strong as an ox, but not steroid strong, he’s country strong. I’ve seen him hit the ball out of the stadium at Great American Ballpark. A marvel specimen to look at, he is 6 feet 6, 275 pounds (although he’s supposively lost a few). I’ve heard so many good stories about Dunner that I could go on forever, but I won’t because that isn’t important. 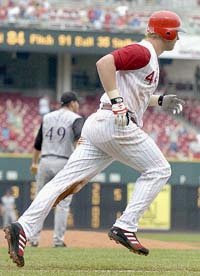 Taking another one for a ride

I fully expect the next 5 years of Adam’s career to be something to marvel at. I said back in 2001 when he broke into the big leagues, that I thought he’d retire as one of the greatest players of all time, and one of the greatest Cincinnati Reds of them all, if not the best to even dawn a Reds uniform. He’s 27 years old, and sitting on 198 career homeruns. His only chance at the Hall of Fame at this point is by riding out the girl he brought to the dance, the long ball. While Dunn will reach a mini-milestone this season, by hitting career homerun #200, he’s got to find a way to get to 250. I want to see him get to 52, marking his first 50 homerun season of his career. If he can average 50 homeruns, for the next 5 seasons, that would give him 450 career homeruns at the age of 32. I’ve heard several times that Dunn isn’t the type of player that will age well, as he’ll have trouble with his size, but that shouldn’t be worried about. Dunn has played in 160 games for 3 years in a row now, and (knock on wood) has only one stint on the disabled list.

We’ve added a new homerun tracker on the site, if you look to the left, you’ll see the new tab “Dunn Career Homeruns” which will be updated up to the minute all season long, or until George complains about my man-crush on the Big Donkey and forces me to take it down.

Dunn has a $13 million dollar option after this season, and if he doesn’t have a big year the Reds probably won’t exercise the option. Basically he has to have a big year or he will no longer be a Red, thus ending the marriage that I love, and not allowing him to be my favorite ballplayer any longer.

If indeed, this is Dunner’s last season in Cincinnati; it’s going to be a great one. I predict that Dunn will be an MVP type player this season and assume a leadership role for that team.

I had to put this video on here. Tell me this video isn’t pretty inspiring for Reds fans?

Related Items
Next Story → Irony at it's finest