The time we hung with Jerry Narron…aka 'Old Grey Goose' 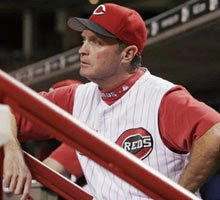 Reds Manager Jerry Narron
Earlier today, we gave mention to some of our friends out in the world that is Major League Baseball. We couldn’t help but include one more, and devote a post to him for his very own. This is an enchanting story, one that involves being drunkards, big time baseball fans, and well that’s it.
George and I had just finished up a night in the scout seats at Great American Ballpark in Cincinnati. Before the game (on the way also) we drank about 3 Budweiser tall-cans a piece. During that game I honestly think we drank about 5 beers each and a Jack and Coke each inning. George was in a good mood, and he was buying. I wasn’t about to let that opportunity get away. The Cincinnati Reds were playing the Pittsburgh Pirates. In fact, this story takes place on the same weekend as The Mesa story does. Talk about weekends to remember.
The game ended, and we were already drunk. I was heading into my senior year in college, and let me tell you, when I was already drunk, I was just getting started. That night I was ready to tie on a legendary drunkerdness. We were waltzing back towards where we parked to try and find a local watering hole. If you’ve ever been to downtown Cincinnati, there’s buildings and restaurants, but if you wanna get into some good shit as far as bars go, you gotta go across the bridge into Newport, Kentucky. We knew this but we were willing to try anyway. Then by the grace of God, a man walked up and changed our night and our lives.
“Hey you guys look like you’d like to meet some girls,” he said.
“Yeah we’re single, why not.”
“Well at my hotel up here around the corner, the Hilton, there’s about 1000 sorority girls. Yeah there’s a fucking national convention for some sorority there. Follow me, I’ll just take you there.”
Why not. We followed the nice man, and were soon in the lobby of the Cincinnati Hilton. It was luxurious, I mean fit for a king. To the right there was an upscale bar, with an older crowd, but no girls. The man indicated that there was girls, but we’d have to wait because
“they’re in meetings till later tonight,” he said.
No problem for us. I don’t think girls were really what we were looking for. We wanted more booze, and girls would just be gravy at that point. We sat down at the fancy bar, and ordered up two drinks. The man that served them to us, Morgan, is a post that will come at a future date, because he deserves one all to himself to say the least. He was half gentleman, half fag, half Chippendales dancer. He mixed a strong drink and strutted his stuff behind the upscale bar at the Hilton. He knew every story, and everyone knew him. We drank, talked with Morgan (blackout) I don’t remember a lot of the convo with him, but no matter. He had a nice tan on him Morgan did. He’d probably been at the Spa all day. We chatted it up with a married couple celebrating their 25 year anniversary. They’d ‘gotten away’ for the weekend and were enjoying single drinks each for their ‘big anniversary’. That’s how shitfaced fuckin’ drunk I was, just talking to this strange couple, and REALLY enjoying it.
We waited, and kept drinking. By this time my tongue had to be hanging out. I started talking to a gal, probably late 20s and overweight. Not good looking at all. Then it happened.

Up from behind me a man came.

It was none other than Jerry Narron himself, just named the new skipper of the Cincinnati Reds. There he was, all slicked up and ready for a night on the town after a saturday night loss.

“You’re Jerry Narron. How’s it going, I’m a big fan of your ballclub. I was there tonight. Let me buy you a drink.”
“No I’ll have to decline,” said old Jerry, with his boyish grin. He talked in that voice he’s got, you know, he sounds like he has a frog or a dick stuck in his throat. I asked him a few questions and then I walked away to tell George.
“Why don’t you go talk to my coach over there. His name is Randy Whistler. Go say hi, while I talk to my girl,” said ‘The Grey Goose’.

And there he was. He ditched me to start spittin game at some average looking chick about half his age. It should be noted that I think he’s married. Ah well, no matter. I went back to tell George that I’d just shot the shit with Jerry Narron, manager of the Reds. Among the things he told me on that hazy night:

So then, all the sudden George and I are bullshitting with Mr. Randy Whistler. I don’t remember much about that either except for the fact that we were remarking on the fine piano player in the bar, and Mr. Whistler (1st base coach) enjoyed that as well. We were laughing and enjoying our whiskey, and I was enjoying listening to George talk his way out of a mess with his ex-girlfriend when all the sudden something made me ask for the check.

I looked it over to see a barrage of jack and cokes, and a few beers. Then there was 2 drinks on there, each costing $10 a piece. Grey Goose and soday? What the fuck? George was paying the tab but still, I didn’t drink Grey Goose. Neither did George. We looked across the bar, and there it was, a grin a mile wide on the mouth of Jeraldberger R. Narron. The guy who didn’t want a drink gave us a wink, and with a smile lifted his glass towards us (still hitting on girl). I asked the bartender about the drink(s) in question. You’ll remember, I offered Narron a (1) drink.

“Ma’m, we didn’t order any Grey Goose here. There must be a mistake.”

“Yeah, the gentleman over there said you were buying him drinks.” said the bartender.

Again I looked over across the bar, Grey Goose Narron smiling ear to ear and tipping the glass towards us. George and I felt somewhat cheated. We had to get something out of this. Hell, he should have been buying us drinks.

We walked over to Grey Goose himself, as he was starting to feel a little warm in the belly and sure enough, he was still hitting on that girl I’d made simple convo with. Turns out he is territorial not only with said woman, but also with his Grey Goose. He wanted to enjoy it by himself, and on our coin. Fair enough, but we had a proposition for him.

“I guess I got thirsty boys,” Grey Goose Narron said with a wink.

“We’re going to the game tomorrow,” I said. “You owe us a couple baseballs at the least, eh big guy?”

He nodded with a nod that said ‘yeah, you’ll get your baseballs you leaches, now getoutta here so I can go on and fuck her’ kind of nod, you know?

We show up the next day, and we might have been the only ones in the park knowing why old Narron was sleepy eyed and wearing sunglasses. He saw us first, and before we could even say anything, he hopped into the dugout, grabbed two pearly whites, and tossed them right up to us.

No GG Jerry, thank you.