A Scout's Take: The Detroit Tigers

With the preseason now in full swing, the scouting department here at Diamond Hoggers is hard at work. Today, we spoke with a few scouts about the Detroit Tigers outlook for the 2007 season. Here is what we found:
I really like watching Placido Polanco play. I always thought of him as a mini-Pujols. If Pujols had a child with a small woman, Polanco would be the spawn. He looks like Albert with a mis-shaped head. Joel Zumaya has a very powerful arm, yielding fastballs of 98 mph + at times. You think he throws hard, you should see how fast he can beat off. After a bad start last year on the road, Kenny Rogers returned home to Detroit and beat the fuck out of his Labrador. His wife threw him out of the house for a few weeks and he promised he’d never do it again. After she let him back in the house, he then tied the family cat to the railroad tracks and mocked it until it was ran over and died….some guys never learn. You know, Jose Mesa is on this team. We expect ‘senior smoke’ to continue to reserrect his career, largely due in part to his offseason diet. Mesa discliplined his stomach, eating only Sprees, Jolly Ranchers, and tootsie roll pops in the winter months. Jose told us that it takes 17 licks to get to the center of a tootsie roll pop; we were surprised at that figure, but he later admitted it was inaccurate, that he just said 17 because he was stoned and his patience worn thin. Speaking of “Seniors” and “smoke”, we spoke to Manager Jim Leyland at length. Reportedly Leyland has signed a lifetime endorsement contract with Marlboro this offseason, rejecting opportunities with Gatorade and Reebok. Leyland said he chose Marlboro because: “I have the shit for breakfast, lunch, and dinner.” As we were talking to Jimmy, he was looking for a light for his breakfast, to go along with a sprite. Craig Monroe was benched last season not because of a strikeout problem, but because he spread a rumor that Leyland smoked so many cigarettes, that he was now shitting cig-butts. Monroe later admitted that the found butt was just because Leyland likes to smoke on the shitter and makes more sense than using an ashtray. Carlos Guillen has ears like a wombat; I wonder if he has sonar on those fuckers? Todd Jones grew his facial hair in a fu last season not to intimidate hitters, but because he is fascinated with catfish. Said Jones: “If you’re gonna catch one of them little boogers, you have to look and think like one”. Brandon Inge and Chris Shelton once played a game of “who can hit the lightest”. Shelton allowed Inge to go first, and after Inge lightly tapped Shelton, Shelton struck back with a powerful blow to Inge’s stomach, and simply said “you win.” 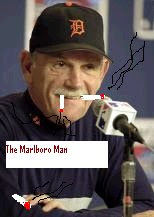